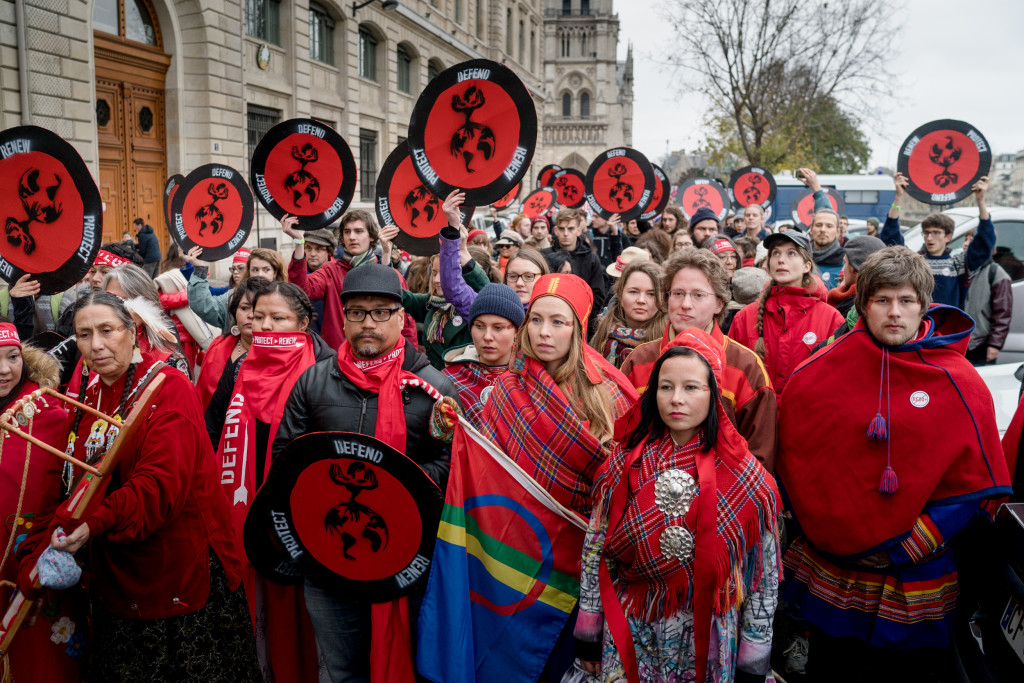 The Paris accord is a trade agreement, nothing more. It promises to privatize, commodify and sell forested lands as carbon offsets in fraudulent schemes such as REDD+ projects. These offset schemes provide a financial laundering mechanism for developed countries to launder their carbon pollution on the backs of the global south. Case-in-point, the United States’ climate change plan includes 250 million megatons to be absorbed by oceans and forest offset markets. Essentially, those responsible for the climate crisis not only get to buy their way out of compliance but they also get to profit from it as well.” – Alberto Saldamando, Human Rights Expert & Attorney. [1]

Paris, France – At 8am, Indigenous Peoples block took to the streets of Paris for an Indigenous Rights action to start the closing day of COP 21, hours before the final agreement was to be presented and a huge mobilization of civil society for a D12 march was to begin.

Representatives from Indigenous nations of Circumpolar, Amazon, South Pacific and North America joined for an early morning sunrise ceremony prayer at the foot of the historic Notre Dame Cathedral, to close the climate negotiations. The ceremony was disrupted by Paris Police who came to the square and begun to remove banners. 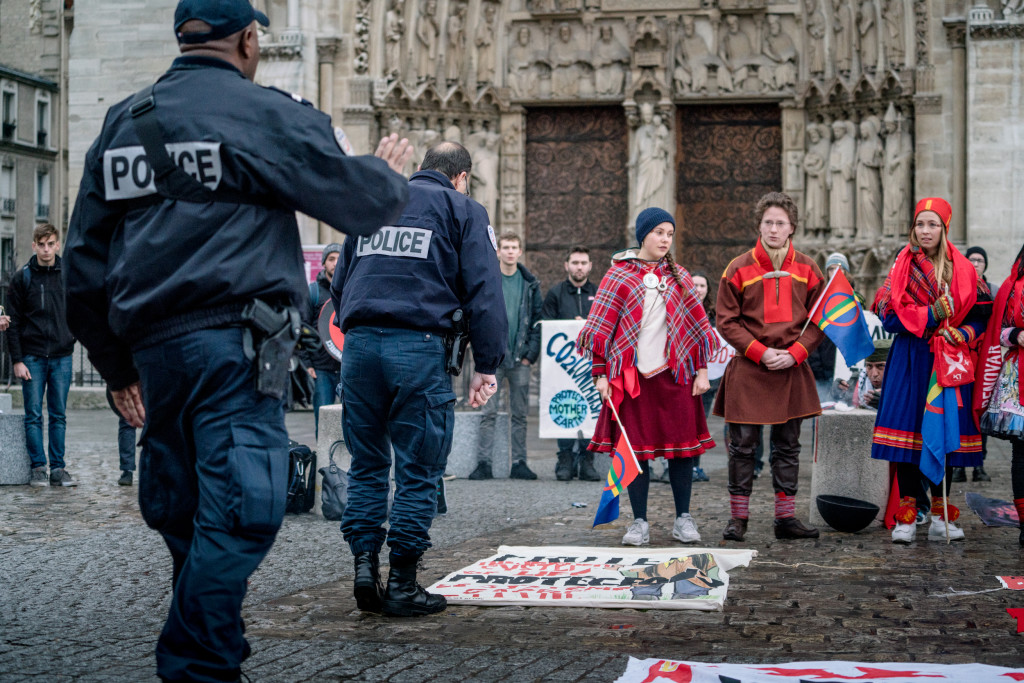 “We, Indigenous Peoples, are the redline. We have drawn that line with our bodies against the privatisation of nature, to dirty fossil fuels and to climate change. We are the defenders of the world’s most biologically and culturally diverse regions. We will protect our sacred lands. Our knowledge has much of the solutions to climate change that humanity seeks. It’s only when they listen to our message that ecosystems of the world will be renewed” – Tom Goldtooth Executive Director of Indigenous Environmental Network

The morning prayer circle was moved down the street to the infamous Pont des Arts, also known across the world as the ‘Love Lock Bridge’ where Indigenous Peoples staged a direct action. Their collective message was clear – “People discuss ‘red lines’, we are the red line. We are the keepers of the land, protectors of animals, the seas, the air. We are the solution.”

“Our planet is hotter. The seas are rising. Our communities are facing reality that we may have to move, we have winter wildfires happening in the Arctic. We are out of time. Any solutions that do not talk about cutting emissions at the source, or keeping fossil fuels in the ground, are false solutions. We don’t have time to talk about carbon markets, carbon trading, REDD+ projects. We must act now [3]. ” – Dallas Goldtooth, Dakota/Dine, Campaigner with Indigenous Environmental Network.

“The seas are rising, our communities have nowhere else to go” – Sina Brown-Davis, Maori activist

At noon, Indigenous peoples joined in solidarity with the global D12 REDLINE action at Arc de Triomphe. At the front of action, Indigenous Peoples held a conference condemning the failed leadership of nation states for their exclusion of Indigenous rights and human rights in the operational text of the Paris agreement .

“Here at the COP21 they are proposing false solutions to the climate crisis, they are proposing a commodification of the sacred, they want to put a price on the air we breathe. They want to go into other countries, displace our Indigenous brothers and sisters, so that they in the US can continue killing our people. We are the frontlines, we are the red lines” – Kandi Mossett (Mandan, Hidatsa, Arikara, North Dakota) speaking at the march.

During the march, a traditional Ponca cradleboard was presented to the people of Paris. The cradleboard represents future generations and was carried by Casey Camp-Horinek (Ponca Nation, Oklahoma, USA) who spoke at the march – “We come here with a present for Paris, we know what happened on November 13. We Indigenous people know how that feels to have someone kill the innocent ones. We offer this symbol in memory of lives lost, and we thank-you for hosting us on this sacred day.” 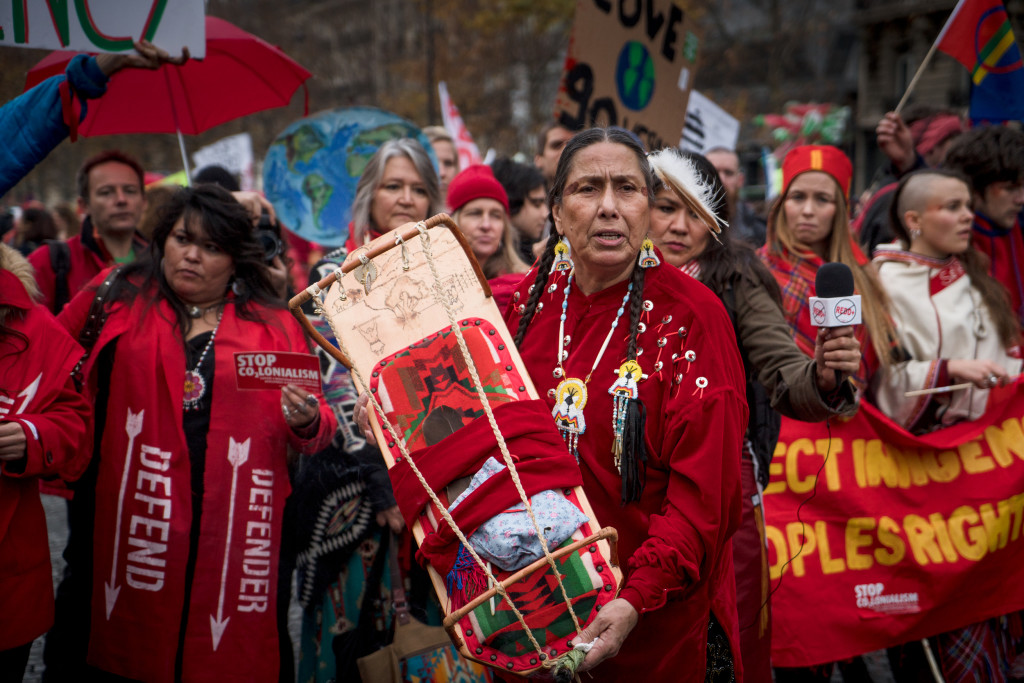 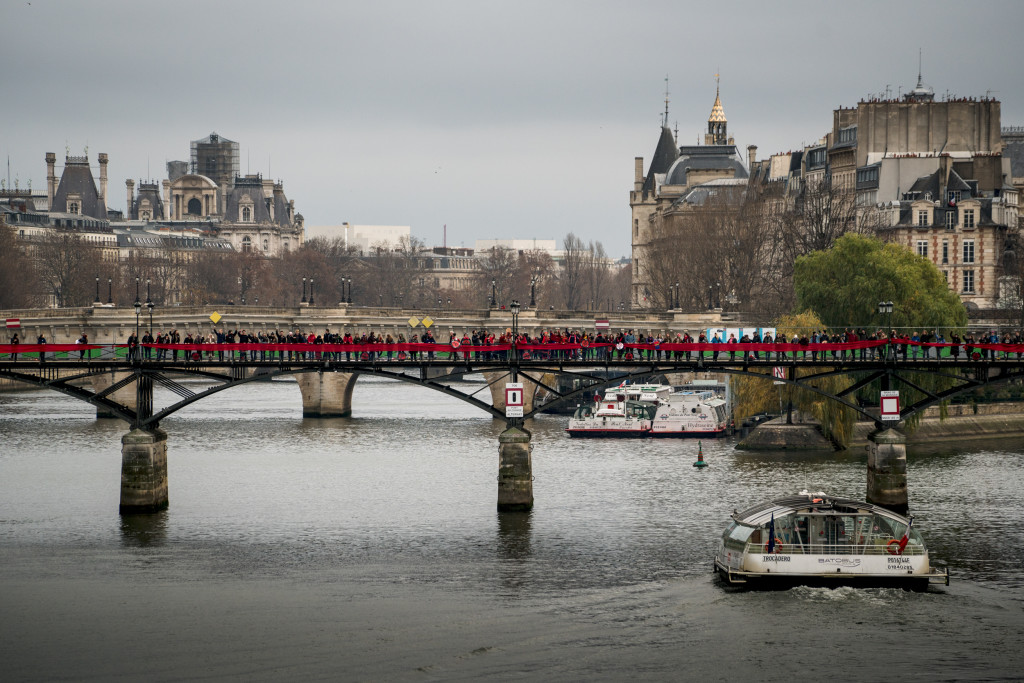 [1] US, European and other states push for exclusion of binding Indigenous rights from agreement http://www.theguardian.com/environment/true-north/2015/dec/07/indigenous-activists-take-to-seine-river-to-protest-axing-of-rights-from-paris-climate-pact

[2] Lack of acknowledgement  of Indigenous Peoples Rights in draft treaty of Paris Climate Accord could negatively impact both them and the climatehttp://america.aljazeera.com/articles/2015/12/10/indigenous-rights-knowledge-left-out-in-cop21.html?utm_content=bylines&utm_campaign=ajam&utm_source=twitter&utm_medium=SocialFlow

[3] UN Paris Accord could end up being a Crime against Humanity and Mother Earth http://no-redd.com/indigenous-peoples-un-paris-accord-could-end-up-being-a-crime-against-humanity-and-mother-earth/